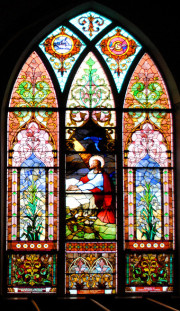 BethanWant to Become a Member?

Please call us at:

Worship begins in our sanctuary at 10:15 am each Sunday.  Sunday School is during the worship services on  Dec 4 & 18th.

Hope on the Hill will be serving dinner at 5:30 pm (please note the change in time).  HOTH will be the second and fourth Wed of each month.

Connect with us on Facebook to learn about upcoming projects and volunteer opportunities.

Our story begins in June of 1881 when the people of Spring City expressed a desire for a Reformed church to be organized in the town of Spring City. The first gatherings that would result in a congregation were at Mechanics Hall, located on Hall Street where the Tall Cedars now meet. This budding congregation was formally organized April 25, 1882. The Word of God has been preached, the sacraments have been celebrated, mission work and community service have continuously been offered since that time in various forms and methods.
We have undergone some name changes the result of a central belief that one Holy Spirit unites all people who accept Jesus as Savior and Lord. While there are many ways of living out our Christian Faith we are still one.  Thus we have sought to bridge the gap between Christian denominations so that Jesus’ prayer “that they may all be one” becomes a reality.
The first merger was with the Evangelical Church to become know as the Evangelical and Reformed Church.  In 1957 after months of conversations the Evangelical and Reformed churches joined with the Christian Congregational churches to become the United Church of Christ. One of our common statements is that we are a church that is united and uniting.
The vision of answering Jesus prayer, “that they may all be one” has taken on a new form and deeper understanding in that no longer do we seek this unity by mergers and becoming one grand denomination but simply recognizing the validly of each other’s ministries and work toward a common goal regardless of the congregation we serve in. In recent years this has also translated into the exploration of other religions to discover the connections and the differences so that knowledge and understanding governs our relationship with other religions rather then fear.
In our 130 years we have been God’s witness to the community during the growth of Spring City, the Great Depression, two World Wars, post war prosperity, several smaller wars and police actions, terrorist attacks and the economic ups and downs of recent years. If God wills we plan to continue to be that witness to God and God’s love for all humanity as shown through the life, death, and resurrection of Jesus of Nazareth.
﻿